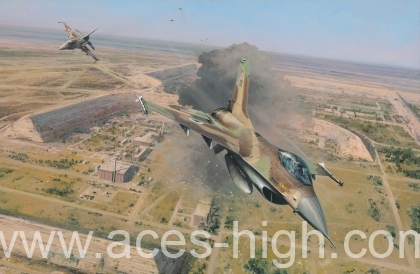 In 1977 Israeli Intelligence received a disturbing report; Iraq, under its dictator Saddam Hussein, had started the construction of a plutonium nuclear reactor at Osirak, just south of the capital, Baghdad. Bought from the French and being built with the aid of French technicians, Israeli leaders believed the new plant would soon be capable of producing nuclear weapons for use against them, and decided to destroy the reactor with a pre-emptive strike.

But there was a problem – no fighter in the Israeli Air Force had the necessary range of flying to Baghdad and back. Two years later, by a stroke of good fortune, the Americans offered to supply Israel with their very latest F-16 multi-role fighter-bombers. With careful planning, external tanks and flying at speeds designed to conserve fuel – not the best speed for traversing hostile territory – the F-16s might just make it. The pilots chosen for the mission would require extraordinary flying skills because the slightest miscalculation or enforced diversion could well spell disaster.

The attack, code-named Operation Opera, began on the afternoon of Sunday 7 June 1981 when eight F-16s armed with two 2,000lb bombs, twin Sidewinder missiles and three external fuel tanks, took off from their Sinai base escorted by six F-15 fighters and a single E-2C Hawkeye to provide airborne early warning and control.

Shortly after 17.30 hrs, having completed their low-level inbound flight as planned, the F-16s climbed steeply, with the sun at their backs, before they dived in two waves of four aircraft. Carefully researched with the help of Israeli Air Force veterans to provide one of the most accurate depictions of the attack yet created, Robert Taylor’s dramatic painting Strike Force portrays the moment the F-16s struck. Minutes later the near-finished reactor was a blasted wreck and meeting little resistance from ineffective flak and a few failed missile launches, the F-16s turned for home. Not a single Israeli aircraft or pilot had been hit and all returned safely.

In testament to what is one of the most dangerous long-range attack missions in the history of air combat, the Military Gallery has now published Robert’s outstanding painting as a veteran-signed limited edition print. Adding great provenance, joining Robert in signing the prints are six of the highly-skilled Israeli Air Force pilots who took part in Operation Opera, providing a worthy addition to all collectors with an interest in the history of air combat.

Due to popular demand, we’re delighted to offer ground-breaking Legacy Remarques on this release. Robert’s talented son, Richard Taylor, will create a specially hand-drawn Remarque in the lower border of the print.

CLICK HERE for more information and prices on The Legacy Remarques.