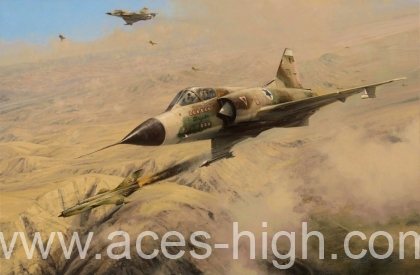 “The pilots of the Israeli Air Force have faced numerous challenges and have faced them head-on. No tribute to them is fitting enough for the coverage and honor they display in the line of duty”

A formation of Mirages led by Lt Col Avi Lanir, commander of 101 Squadron Israeli Air Force, intercepts MiG21's over the Syrian Desert on 9 November 1972. In the ensuing dogfight two of the Syrian MiG's are shot down, one of them from a direct hit by Lanir to score his second MiG victory.

Created with the direct input of one of the greatest Jet Aces of the Supersonic age, Giora Epstein, this spectacular piece is a tribute to one of the greatest fighter leaders of the Isreali Air Force, Lt Colonel Avraham Lanir and depicts an arena of aviation combat that is seldom featured.

This historic release is endorsed by some of the most legendary Jet Aces in history and the edition is personally signed by a staggering TWENTY SIX Israeli Aces that flew the Mirage in combat, amassing a total of more than 207 victories between them:

The Gicle'e Edition is signed only by the artist. Overall size 36" wide x 24" high.