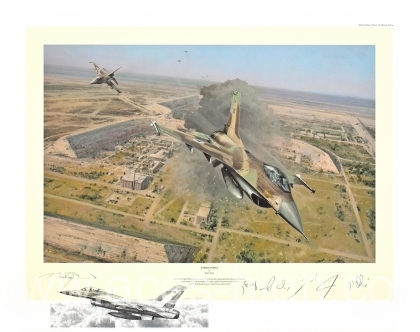 Shortly after 17.30 hrs, having completed their low-level inbound flight as planned, the F-16s climbed steeply, with the sun at their backs, before they dived in two waves of four aircraft. Minutes later the near-finished reactor was a blasted wreck and meeting little resistance from ineffective flak and a few failed missile launches, the F-16s turned for home. Not a single Israeli aircraft or pilot had been hit and all returned safely.

This dramatic piece serves as a testament to what is one of the most dangerous long-range attack missions in the history of air combat.

Due to popular demand, we’re delighted to offer ground-breaking Legacy Remarques on this release. Robert’s talented son, Richard Taylor, will create a specially hand-drawn Remarque in the lower border of the print.

Along with the artists Robert Taylor and Richard Taylor, this print carries the original signatures of six veterans of the Israeli Air Force who flew the F-16 Fighting Falcon during Operation Opera: