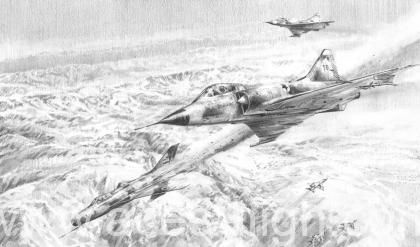 IAF Squadron Commander Avaham Lanir, flying an Israeli Air Force Mirage III high over the Syrian desert, scores a victory over a Syrian MiG-21 on 9 November 1972. Later, during the Yom Kippur War, his Mirage was hit by a Syrian missile ambush, forcing him to eject over enemy territory. Despite valiant efforts to rescue him, he was captured by the Syrians and died under interrogation.

Commissioned to honor the memory of Lt Col Avraham ‘Avi’ Lanir, one of the Israeli Air Force's most respected commanders, Robert Taylor’s sensational working drawing is the original conception behind his outstanding painting ONE MiG DOWN and is signed by no less than SIX JET DOUBLE ACES!

Joining artist Robert Taylor in signing each print are six Israeli Air Force fighter pilots who have the rare distinction of being Double Aces. Between them they have amassed at least 74½ jet victories: