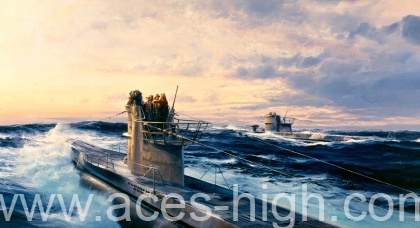 Winston Churchill once wrote that, “the only thing that ever really frightened me during the war was the U-boat peril”. Robert Taylor’s dramatic image illustrates the extreme threat posed by the German U-boats as U-333, commanded by Commander Peter Cremer, rendezvous with another U-boat to scour the horizon for potential targets.

It’s staggering to think that the average life expectancy of a U-boat sailor during World War II was a mere 60 days. It was a cramped, difficult and highly dangerous occupation. Little wonder then that so few lived to tell the tale, and why Robert Taylor’s exceptional print is so important because it was signed not only one of the few surviving U-boat commanders, but a commander who fought on submarines for nearly five years. That man, and the person who makes these prints so sought after, was the legendary Peter Cremer, commander of U-333 amongst others, and holder of Germany’s highest award, the Knight’s Cross. In the last weeks of the war he was the personal bodyguard to Hitler’s successor, Admiral Dönitz.

Each edition in this release has been hand signed by the artist as well as: