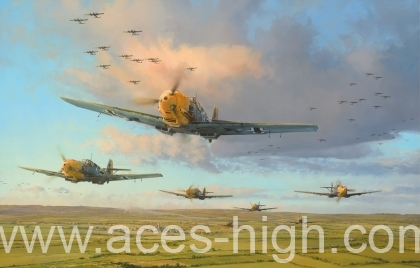 After the fall of France in June 1940, Hitler’s domination of Europe was nearly complete. Only one tiny island stood in his way – Britain. Alone, and reeling from the calamity on the beaches of Dunkirk, the Nazi dictator expected Britain to capitulate immediately – he was wrong. The Battle of Britain was about to begin.

Air Armada is the first in Robert Taylor’s Battle of Britain Trilogy entitled The Hardest Days, issued to commemorate the 70th Anniversary of the battle. All three prints in this inspiring new series will focus on the “Hardest Days” which began on August 12th and ended with heavy casualties for both sides on August 18th.

This magnificent masterwork, Air Armada, recreates a moment on the ‘Hardest Day’ of the 18th of August, as Heinz Bär, the Luftwaffe’s top-scoring NCO Ace of the Battle of Britain and one of the greatest Aces in history, climbs away from his airfield near Calais with the other pilots of 1./JG51 to escort the Do17s of KG76 for yet another deadly attack on the RAF. Away in the distance, Me110s from EPRG 210 also prepare to join the epic encounters that lie ahead.

Each print provides a unique snapshot in time and depicts the events from both sides of the conflict.

Each print is personally signed by artist Robert Taylor, and individually hand-numbered; together with two famous Luftwaffe fighter Aces who flew and fought in the Battle of Britain:

With all the components of ‘The Limited Edition’, this special FIVE signature Anniversary Edition has been additionally signed by three of the most highly respected Luftwaffe veterans who fought in the Battle of Britain:

This outstanding ELEVEN signature edition contains some of the most famous Battle of Britain Luftwaffe pilots, achieving a staggering 1296 victories between them, and including the extremely rare original signature of Heinz Bär. It is a unique opportunity for serious collectors to acquire a fitting and lasting tribute to the outstanding airmen involved in the Battle of Britain. With all the signatures and components of the Anniversary Edition, every print in this special Tribute Edition is accompanied by a substantial ORIGINAL pencil drawing individually crafted for you by the world’s premier aviation artist Robert Taylor. Each drawing is different and will feature aircraft relevant to the painting 'Air Armada', the first in Robert Taylor’s new Battle of Britain Trilogy 'The Hardest Days'.