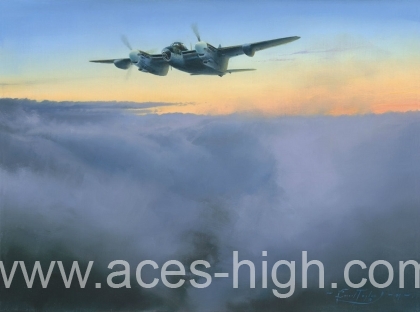 When its ageing Blenheims were replaced by the Mosquito in the winter of 1941, Number 105 Squadron became the first RAF unit to be equipped with this remarkable new light bomber, its speed and manoeuvrability making the twin engine aircraft ideal for surprise daylight attacks.

Here, De Havilland Mk IX Mosquito (LR503) of 105 Squadron, flies at high-altitude during a mission over occupied Europe in early 1945. Completing a record 213 operational sorties with the Pathfinder Force, this aircraft became one of the most successful bombers of all time.

The editions are signed by eminent RAF & RAAF airmen who flew the Mosquito during WWII, and represent not only Bomber Command, but also the men of Coastal and Fighter Commands. Each print is signed by the artist Robert Taylor, and hand-numbered.

This FIVE signature edition is signed by:

The TWO signature RAAF edition is signed by RAAF Airmen who both flew Mosquito LR503 with the Pathfinder Force.

With all the signatures of the RAF Edition, these EIGHT signature Proofs are additionally signed by the RAF’s top night-fighter Ace, and matted to include the original signatures of two of the RAF’s most highly decorated and respected Mosquito pilots.

This RAF Limited Edition has been conservation matted and addionally signed to create a NINE signature collector's piece: