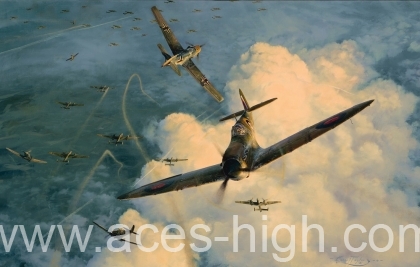 Me109’s from 1./JG51 and Spitfires of 54 Squadron clash head-on over Kent as the unit dives into a formation of Me110s from KPRG210. It is 54 Squadron’s third and final sortie of the day, early evening on Sunday 18 August 1940, at the end of the hardest week of fighting during the Battle of Britain. In the distance a group of Hurricanes tear in to a formation of Do17s from KG76 as they too struggle back towards France after another day of relentless assaults on the airfields of southern England.

For six days the Luftwaffe attacks on RAF Fighter Command airfields and radar stations in southern England had reached epic proportions, culminating in the ‘Hardest Day’ of them all – Sunday 18 August 1940.

For nearly a week the Luftwaffe had thrown everything they had into the attack on southern England in order to annihilate RAF Fighter Command, and gain air superiority over the Channel in preparation for Operation Sealion, the invasion of Britain. And, heavily outnumbered, the young RAF Spitfire and Hurricane pilots of Fighter Command had so far repelled them, at a cost.

The Battle of Britain isn’t yet won, but the tide has begun to turn. Within a month it will effectively be over and the invasion of Britain postponed for ever. Goering, having failed in his much-vaunted boast to bring Britain to heel, will slink back to Berlin.

Robert Taylor has commemorated the 70th Anniversary of the Battle of Britain with this crucial day for the Hardest Days Trilogy. Valiant Response is the third and final edition in the series and continues the events depicted in Air Armada and Hornchurch Scramble.

Each print is personally signed by the artist Robert Taylor and accompanied by the following highly respected RAF pilots who flew fighters in the Battle of Britain.

With all the components of the “Limited Edition”, this special TWELVE signature Anniversary Edition has been signed by a further NINE RAF & Luftwaffe Battle of Britain veterans, including the legendary ‘Macky’ Steinhoff:

This wonderful TWENTY signature edition is released with all the components of the Anniversary Edition, PLUS every print accompanied by an ORIGINAL pencil drawing by the world’s premier aviation artist Robert Taylor. Two RAF veterans have joined the artist in signing each drawing, which has been conservation matted to include the original signatures of six legendary figures who flew in the Battle of Britain, including two of the highest scoring pilots of the conflict: