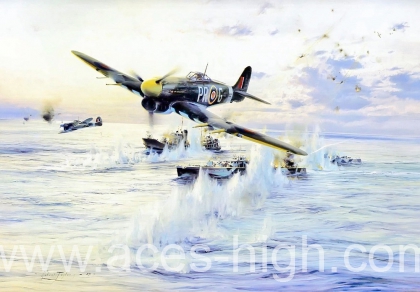 That the Typhoon developed from an unreliable fighter that never lived up to expectations into the RAF’s most devastating ground-attack aircraft of World War II was due to one man – Battle of Britain veteran and famous Test Pilot ‘Bee’ Beamont. As Commanding Officer of 609 Squadron, one of the first to operate the Typhoon, ‘Bee’ Beamont alone realised that the troublesome fighter had hidden potential. It was fast at low-level, tough and able to carry heavy payloads; instinctively he knew it could be outstanding in ground-attack. His confidence was, as we know, decisively vindicated. One of the most enduring images of the Battle of Normandy would be of rocket-firing Typhoons decimating the German Panzers at Falaise.

This superb piece, however, contains all that a true Typhoon enthusiast could ask for. The scenario was inspired by a specific raid on German coastal patrol R-boats in the English Channel, typical of many carried out by 609 Squadron. ‘Bee’ Beamont, who led the attack, helped artist Robert Taylor to ensure that all the historic and technical details for this dramatic reconstruction were spot on as he leads his Typhoons into the teeth of the enemy’s flak.

Published over twenty-five years ago and personally signed by ‘Bee’ Beamont, copies of this celebrated piece that are in good condition are notoriously hard to find so please enquire for further details on current availability.