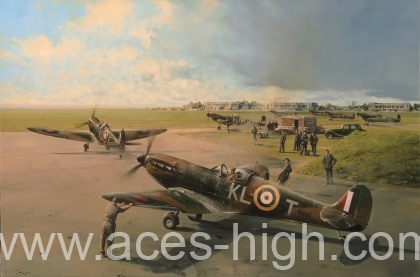 "This is the spirit for dealing with the enemy"

It was late in the afternoon of Sunday, 18 August 1940. A gentle breeze floated over the RAF front line airfield at Hornchurch as exhausted young pilots of the 54 Squadron enjoyed a rare opportunity to rest and reflect on their two encounters with the enemy earlier that day. The previous week had seen the hardest days of fighting in the Battle of Britain, and this Sunday had already proven the toughest of them all.

The respite would be brief, for within moments the calm was shattered by the piercing howl of alarms. A massive raid of 300 Luftwaffe aircraft had been spotted as it swarmed across the channel, the destination: Hornchurch. With the Battle of Britain hanging in the balance, those tired, valiant few of the RAF scrambled to their fighters to meet the Luftwaffe in combat once again.

Hornchurch Scramble, Robert Taylor's eagerly awaited follow up to Air Armada, portrays the moment as 54 Squadron's commanding officer, Squadron Leader James Leathart, taxis out at Hornchurch to prepare for take-off to meet the onslaught of JG51 and an imposing Luftwaffe assault. Quickly following, the aircraft of New Zealander Colin Gray is guided out from dispersal by his ground crew.

Each print is personally signed by artist Robert Taylor, and individually hand-numbered; together with three distinguished RAF pilots who flew Spitfires in the Battle of Britain.

With all the components of ‘The Limited Edition’, this special NINE signature Anniversary Edition has been additionally signed by six of the most respected pilots who flew under RAF Fighter Command in the Battle:

This stunning TWENTY-THREE signature edition contains all the components of the Anniversary edition as well as an ORIGINAL pencil work by the worlds premiere aviation artist, Robert Taylor.

Each original pencil drawing, individually signed by the artist along with eleven of the RAF's most famous Battle of Britain veterans, is conservation matted to include the original signatures of three illustrious 54 Squadron Aces.