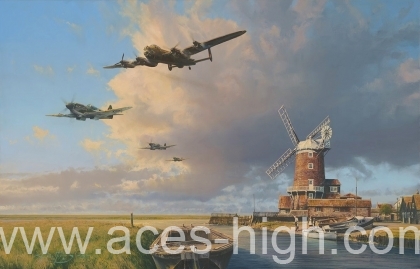 By April 1945 everyone, except a few die-hard fanatical Nazis, knew the war in Europe was over; the end was only a matter of time. So when Bomber Command dispatched a force of over 300 Lancaster bombers to destroy Hitler’s infamous Obersalzberg retreat at Berchtesgaden on 25 April, it would prove to be their last major raid of the war – just a few days later Hitler committed suicide as Berlin crumpled around him. In the early hours of 7 May General Alfred Jodl, Chief-of-Staff of German High Command, unconditionally surrendered all German armed forces and for the RAF the war in mainland Europe was finally over.

The fight had lasted for nearly six years during which time its airmen had faced unmitigated dangers and often appalling flying conditions, with moments of exhilaration balanced by those of terror because victory had come at a terrible price; of the 125,000 aircrew to have served in RAF Bomber Command 55,573 had been killed whilst in Fighter Command 3,690 airmen had paid the ultimate sacrifice.

Undoubtedly the aircrew who flew and fought with the RAF as it played its part in removing the tyranny of Nazi power and occupation from Europe were among the bravest of the brave and two aircraft above all others came to symbolise their heroic fight: the elegant Spitfire, magnificent in defence during the dark days of 1940, lethal in attack thereafter; and the awe-inspiring Avro Lancaster, the four-engined heavy bomber that from 1942 onwards formed the backbone of Bomber Command and allowed the RAF to take the war into the very heart of Hitler’s Germany.

In recognition of the role played by these two legendary aircraft and the men who flew them, Robert’s striking piece depicts a scene during those final few weeks of the war. A battle-weary Lancaster limps home along the Norfolk coast with its outer starboard engine feathered and out of action following one of Bomber Command’s last daylight operations. Luckily a group of Mk.XIV Spitfires is on hand to provide close escort and will see the bomber safely back to base.

Every print in this memorable edition is personally autographed by some of the RAF’s most respected veterans, men who flew and fought in Lancasters and Spitfires, making sure Home Again England is destined to become a classic and sought-after piece.

Every print is individually numbered and personally signed by the artist, together with a famous Lancaster Pilot:

Regarded as the world’s finest aviation artist, Robert’s original work is extremely limited so a hand-drawn pencil Remarque is one of the best ways to own a unique ‘one of a kind’ piece of his artwork.

With all signatures of the Collector’s Edition, each Remarque print will have a delicately crafted original pencil drawing, skilfully created by Robert in the lower margin. The DOUBLE REMARQUES, restricted to just 10 copies worldwide, are issued with a double size drawing, even larger and crammed full of detail and content.

Every Remarque drawing is different and unique!

With an original pencil drawing and ten signatures!

With all the signatures of the Collector’s Edition, each print is issued with a specially commissioned original pencil drawing by Robert Taylor which has been signed by two distinguished veterans representing both RAF Bomber Command and RAF Fighter Command:

Each unique drawing is conservation matted to include the original pencil signatures of a further four of the most famous Bomber Command and Fighter Command veterans of World War II: