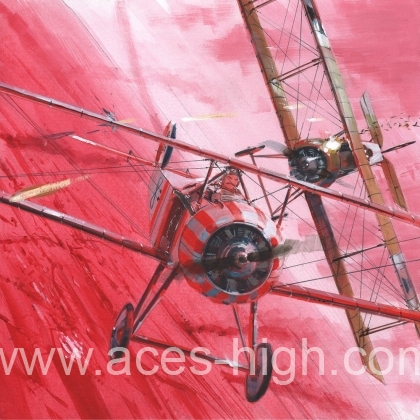 Keith’s background as an illustrator for leading novels, comics and magazines has seen his work featured around the world. We’re delighted to have available a number of ORIGINAL pieces that were specially commissioned for the famous series of ‘Commando Comics’.

Each of these original works is accompanied by a copy of the comic upon which it featured PLUS these comics are personally signed by Keith, creating a special collector’s portfolio.

Available individually or as a complete set!

A Matter of Honour

The Great War saw some of the most progressive advances in technological warfare – and flying aces were at the height of it all!

Pierre Lafitte and Gustav Von Brunner are closely matched in skill, dexterity, and cunning – but when their mutual history stays Lafitte’s hand in an air duel, an opportunity to break the stalemate and discover the better man dramatically unfolds. There’s more to being a hero than flying and fighting. Sometimes it’s… A MATTER OF HONOUR.

It’s 1942. The events of Pearl Harbor have catapulted the US into the war and Tech Sergeant Frank Lewis remembers the carnage like it was yesterday. Now, the solo Wildcat maverick has been assigned to a new unit, but all is not well with his new posting and Frank’s suitability as a pilot is being questioned. Can his new teammates quell his insatiable lust for vengeance? Find out in… AMERICAN AVENGER.

RAF intelligence officer Ian Thompson has his eyes on the prize, and, thanks to arrogant toff Sam Westwell, he now has everything he needs to get it! If only he wasn’t being blackmailed and didn’t have an errant German artist to keep an eye on. But it’s all in a day’s work when you’re…STEALING STUKAS.

Uxton was a prime target. It was home to one of the largest filling stations in Britain, which sent train upon train laden with munitions to the front lines. This, and its sleepy small‑town defence, made it a tasty looking objective for German sabotage.

The only thing standing in the Nazi operatives’ way was two incompetent lieutenants haplessly trying to stop them from turning the tiny village into a blazing… STEEL INFERNO.

The Wombat and the Tiger

A monster is lurking in the shipping lanes north of Port Darwin — the size of which no-one has ever imagined. Freighter after freighter sink without a trace and the only ones who can stop the beast have fought their way into a jail cell! The Wombat and The Tiger crews are fierce in a bar fight — but Captains Griffin and Beaumont must put their differences aside if they are to take on this devil from the Far East.

The last place Private Bill Tasker expected to find himself on his new deployment was at sea — surely that was for the Navy boys? Yet there he was on the top‑secret Blackland Sands sea fort, defending the Thames Estuary from V1 bombs and E-boats. But now it’s thick with fog, he’s lost his pals and a sinister German commando team is hunting him down — would it be the end of his military career?