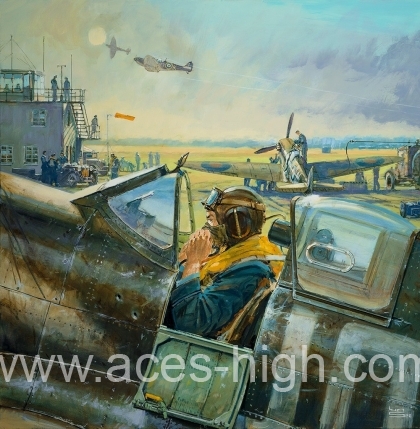 Commemorating the 80th Anniversary of the Battle of Britain

Just 2,936 fighter pilots and aircrew flew against the mighty Luftwaffe during the Battle of Britain and were entitled to wear the rare ‘Battle of Britain Clasp’ to their war medal. To earn that right and become one of ‘The Few’, they had to fly at least ‘one authorised operational sortie with an eligible unit of the RAF or Fleet Air Arm during the period from 00.01 hours on 10 July to 23.59 hours on 31 October 1940’. Understandably it remains one of the rarest ‘clasps’ of them all.

With Britain ripe for invasion, Luftwaffe supremo Hermann Goering overlooked the tenacity, bravery and courage of RAF Fighter Command as, during these testing times, Britain did not stand alone. Although the majority of aircrew were British, nearly 600 men came from other countries. Some such as Poland had been over-run by the Nazis, whilst other large contingents came from Canada, New Zealand, Australia and South Africa. There were even a few Americans.

By the end of the battle they had all learnt to heed Churchill’s defiant words – ‘we shall never surrender’ – and their spirit lives on. However, the vital role played by the supporting cast cannot be overlooked; the hard working ground crews whose endless checks and running repairs ensured the aircraft were ready as soon as they were called upon.

Keith Burns’ latest piece serves as a tribute to all those who took part in the Battle of Britain during that long summer of 1940.

Keith, who joined the Military Gallery in 2020, is currently illustrating the Ladybird Expert History series of the Second World War written by leading historian James Holland. His graphic portrayal, Testing Times, depicts Sergeant Don Kingaby carrying out last minute checks on his Mk.I Spitfire at the height of the Battle of Britain.

With the intensity of air fighting growing, Kingaby and the Spitfires of 266 Squadron will soon be heading out for their next mission of the day. Shortly after midday on Monday 12 August 1940 he would claim his first success by damaging two Ju88s and a Bf110 over the Solent during his first combat sortie from Tangmere. Granted an emergency commission in November 1941 and eventually rising to Wing Commander after the war, Don Kingaby scored 21 victories plus two shared, six probables and 11 damaged, and besides his DSO he remains the only RAF pilot to be awarded the Distinguished Flying Medal three times. His story is indicative of the grit and resolve shown by this wartime generation.

Restricted to just 300 copies worldwide, each print is personally signed by artist Keith Burns, hand-numbered and issued with a unique Certificate guaranteeing its authenticity.

Every copy can be upgraded to include an original Remarque or Double Remarque by Keith in the lower margin of the print. These can be completed in either pencil or acrylic to create a completely unique piece and if you have a particular request, such as a specific aircraft, please ask when placing your order.