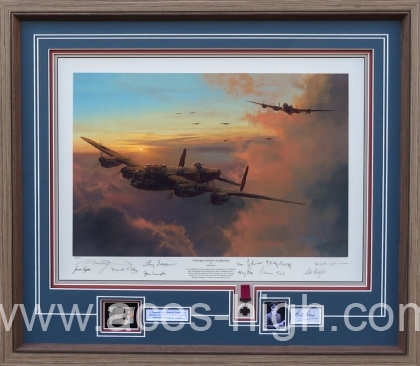 As the setting sun casts a golden glow, a group of Lancasters from 576 Squadron form up after departing from their Lincolnshire base at the start of a raid into Germany in late 1944. The lead aircraft UL-I (LM227) was one of only a handful of Lancasters to complete 100 operational sorties.

Whilst the ‘Few’ of Fighter Command had undoubtedly defeated the Luftwaffe during the Battle of Britain, it was the ‘Many’ of Bomber Command who were to play the pivotal role in delivering to the Allies ultimate victory in Europe. But it came at a terrible cost: with an average age of only 22, the odds of survival were slim and by 1943 the life expectancy for bomber aircrew was just 5 missions. In fact on one raid alone - the Nuremberg raid of 30/31 March 1944 - 543 aircrew were killed, more than Fighter Command lost during the entire Battle of Britain.

This superb piece from the worlds most collected aviation artist is one of his most evocative and dramatic to date and a very limited number of prints are personally signed by one of the most legendary Bomber Pilots of WWII, James Tait, making this a historic and collectable piece.

As a lasting tribute to all those who flew with Bomber Command, our expert team have framed this Collector's Edition Artist Proof print to include an original fragment of Lancaster bomber, reproduction RAF wings, a miniature Victoria Cross, a photo and the original signature of VC recipient Flight Lieutenant BILL REID.