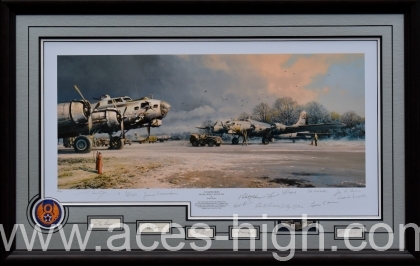 After a brief respite in the freezing weather and with the recent snow beginning to thaw, the B-17 Fortresses of the 100th Bomb Group at Thorpe Abbotts, Norfolk prepare to carry out the Eighth Air Force’s latest mission to Germany, during the harsh winter of early 1945.

Earning the nickname ‘The Bloody Hundredth’ due to the heavy losses they suffered, Robert has fittingly chosen the 100th BG to represent all those who flew so heroically with the US Eighth Air Force in England during WWII.

"As for the American bomber crews, they were the bravest of the brave, and I know that I am speaking for my own bomber crews when I pay this tribute."
Marshal of the RAF Sir Arthur ‘Bomber’ Harris

Honoring all those who served with the 8th AF, this memorable print has been personally signed by no less than ten highly-regarded veterans who flew B-17s with the 100th BG as the Allies pushed for victory in Europe. This superb FIFTEEN SIGNATURE collector's piece is conservation mounted to include an 8th AF patch and a further five original autographs of some of the most famous B-17 veterans to serve during WWII including the Pilot of the famous Memphis Belle and a recipient of the Medal of Honor: