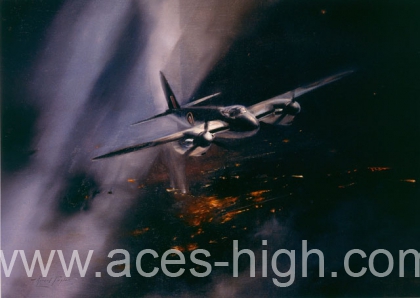 A Mosquito, the most versatile aircraft to fly in WWII, dodges between the flak and searchlights on a low-level night attack.

Originally published in 1983 and signed by famous Mosquito Pilot Group Captain JOHN CUNNINGHAM, this is one of Robert’s earliest pieces of artwork featuring a Mosquito.

Cunningham was known for his night-fighting prowess, being given the nickname ‘cats-eyes’ by the British press.

The print has been matted to include Madapolam fabric, which was used to cover Mosquitos, creating a real authentic collector's piece.

The print has been matted to include madapolam fabric which was used to cover Mosquitos, alongside a photo of the veteran who signed it.