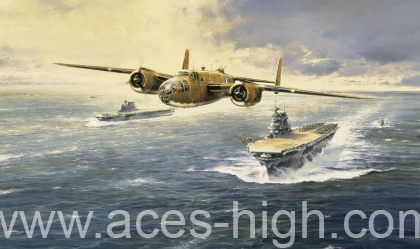 On the morning of April 18th, 1942, just four months following the devastating surprise attack on Pearl Harbor, sixteen Army Air Force B-25 bombers under the command of Lieutenant Colonel James Doolittle engaged in a daring aerial raid to strike back at the enemy’s capital of Tokyo. For his role, Doolittle was awarded the Congressional Medal of Honor.

Robert Taylor’s classic masterwork was created with the technical assistance of Jimmy Doolittle himself, and portrays the moment that Doolittle flies over the carrier to check his compass bearing while another B-25 launches from the heaving deck of the Hornet.

This rare highly sought-after Limited Edition print featuring the Doolittle Raiders is individually signed by the Artist, and numbered. Joining Robert Taylor in signing this important edition are General 'Jimmy' Doolittle and all thirteen of his famous aircrew who took part in the historic raid on Tokyo.