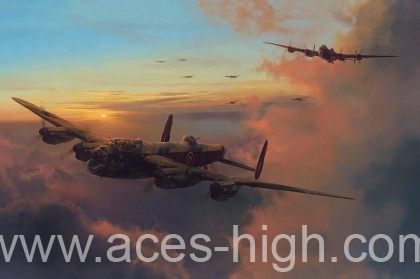 A specially commissioned edition, signed by Group Captain James Tait during his lifetime and now released as a lasting tribute to the men of RAF Bomber Command.

As the setting sun casts a golden glow, a group of Lancasters from 576 Squadron form up after departing from their Lincolnshire base at the start of a raid into Germany in late 1944. The lead aircraft UL-I (LM227) was one of only a handful of Lancasters to complete 100 operational sorties.

Whilst the ‘Few’ of Fighter Command had undoubtedly defeated the Luftwaffe during the Battle of Britain, it was the ‘Many’ of Bomber Command who were to play the pivotal role in delivering to the Allies ultimate victory in Europe. But it came at a terrible cost: with an average age of only 22, the odds of survival were slim and by 1943 the life expectancy for bomber aircrew was just 5 missions. In fact on one raid alone - the Nuremberg raid of 30/31 March 1944 - 543 aircrew were killed, more than Fighter Command lost during the entire Battle of Britain.

This release from the worlds most collected aviation artist is one of his most evocative and dramatic to date and a very limited number of prints are personally signed by one of the most legendary Bomber Pilots of WWII, James Tait, making this a historic and collectable piece.

Between them the airmen of Bomber Command won 23 Victoria Crosses during WWII, and countless others were highly decorated for courage and commitment. Some of these veterans have now joined together to sign this commemorative limited edition to honour all those who served with Bomber Command. They include some of the RAF’s most inspirational leaders; men such as James ‘Tirpitz’ Tait, one of the most highly decorated RAF airmen of WWII. Although sadly no longer with us, we are privileged that he was able to personally sign the prints during his lifetime, creating a truly historic collectors edition.

Joining artist Robert Taylor, each print in every edition is signed by SIX highly respected aircrew who flew Lancasters with RAF Bomber Command during WWII:

This edition carries all the signatures of the Collectors Edition, however each copy is individually conservation matted to include a museum quality reproduction miniature Victoria Cross. Included in the matting are the rare and highly sought-after ORIGINAL pencil signatures of five veterans of RAF Bomber Command who were awarded the nation’s highest award for valour – the Victoria Cross, creating a historic FIFTEEN signature collectors item:

Each of these ten signature prints will be enhanced with a distinctive original pencil drawing by Robert Taylor, hand drawn within the border and just FIVE copies are issued with a Double sized pencil remarque. These are unique and highly prized pieces of original art by the master of aviation art.