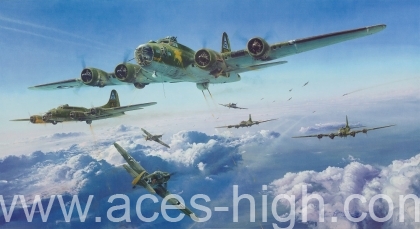 The weeks following the 17 August mission to Schweinfurt were some of the toughest faced by the bomber crews of the Eighth Air Force; losses of aircraft and men were higher than ever before and the seven-day period commencing Friday 8 October 1943 would come to be known as ‘Black Week’. Thursday 14 October would prove the most deadly of them all.

That morning, crews were given the name of the day’s target and it was one nobody wanted to hear – the ball-bearing factories at Schweinfurt. Having failed to eradicate production on their earlier mission, Eighth Air Force Bomber Command would now send all three of their Air Divisions to finish the job.

For the second time in three months the mission would once again mean a 960-mile, seven-hour round trip and the crews knew that the last 370 miles to the target were beyond the range of their escorts. Having faced the ordeal once, the prospect was terrifying.

To make matters worse bad weather plagued the start; fog over Norfolk meant that under half the Second Division’s B-24s got airborne – a force too small for the mission ahead and, instead of continuing to Schweinfurt, they were dispatched to diversionary targets.

With mission commander Colonel ‘Budd’ J. Peaslee flying alongside Captain J Kemp McLaughlin of the 92nd Bomb Group, 149 B-17s of the First Division set their course to Schweinfurt but once again the moment their escorts departed, the Luftwaffe struck. As with the August raid, the relentless assault lasted all the way to the target. By the time they reached Schweinfurt less than half of the bombers remained airborne, but undeterred by the mayhem around them, the survivors held their course and bombed successfully. All the targets were hit; now all they had to do was fight their way back.

The Third Division, following on a slightly more southerly route, fared better on the outbound journey to Schweinfurt but as they turned after bombing it was their turn to take a pummelling – and worse was to come. A quarter of the force that had set out for Schweinfurt that morning failed to return.

Bruised, battered and running out of fuel, the survivors staggered home, with some just glad to put down on the nearest airfield they could find. Although the raid had destroyed production – it would be months before the ball-bearing plants were running smoothly again – the overall losses suffered by the Eighth were again horrendous.

A MASTERWORK TO BE TREASURED FOR A LIFETIME!

Schweinfurt – The Second Mission is one of Robert’s most dramatic paintings. Depicting Colonel Budd Peaslee’s B-17 Equipose, flown by Kemp Maclaughlin, as they lead the Fortresses of the 92nd Bomb Group high over Germany en-route to Schweinfurt and under constant attack from enemy fighters. We’re delighted that this magnificent piece is now available as a Giclée Proof on canvas issued to commemorate the heroism shown by the young men who flew with the Eighth Air Force on the Regensberg – Schweinfurt missions.

With each proof signed by Robert Taylor, still the world’s premier aviation artist, every copy in this highly-restricted release is individually numbered, hand-stamped on the reverse, and issued with a Certificate of Authenticity.