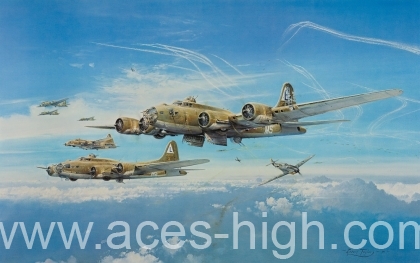 Exactly a year after the Eighth Air Force had completed its first ‘official’ mission of the war, 17 August 1943 saw them undertake their most ambitious raid to date – a two-pronged ‘double strike’ deep into the heart of Bavaria. The Eighth’s B-17s were going deeper into the Reich than ever before and, like the raid on Ploesti a few weeks earlier, much of the mission would be well beyond the range of fighter escort. A tough day lay ahead.

The first force, led by Colonel Curtis LeMay, would mean 147 B-17s from the Eighth’s Third Air Division traversing the breadth of Germany to bomb the Messerschmitt factory at Regensburg, a plant producing over 300 Bf109 fighters every month. LeMay’s division would then fly on to airfields in North Africa whilst the second force of some 230 Fortresses from the First Air Division led by Brigadier General Robert B. Williams, would follow and attack the ball-bearing factories at Schweinfurt before returning to England.

The Eighth was expecting trouble – and got it. As soon as their escort fighters reached the limit of their endurance and departed, the Luftwaffe pounced. With several hundred Fw190s and Bf109s attacking the bomber formations as they bludgeoned the paths to their targets, the routes were plotted by a trail of flame, smoke, explosions, parachutes and debris from damaged or disintegrating aircraft. Of the Regensburg force, 24 Fortresses were lost, more than 50 damaged and 200 men were missing in action, but a large part of the Messerschmitt plant had been destroyed.

The Schweinfurt force fared even worse, especially as they battled home: 36 aircraft lost, 121 damaged and over 352 men were missing in action. But although serious damage had been inflicted on the Schweinfurt factories, the production of ball-bearings was barely halted.

It takes an artist of international stature to convey those air battles of August 1943 as emotively as Robert Taylor does and Return from Schweinfurt, originally published as a signed limited edition in 1990, remains a ‘timeless memorial to all those who flew that historic day’. The painting depicts a moment soon after one of the few positive air battles fought that day as high above the battle-scarred B-17s of the 91st and 381st Bomb Groups fighting their way back home, con-trails reveal the P-47s of Hub Zemke’s 56th Fighter Group, now out of ammunition after destroying 17 Luftwaffe fighters over Holland and Belgium. In their place Johnnie Johnson’s Canadian Spitfire Wing takes up the fight.

A MASTERWORK TO BE TREASURED FOR A LIFETIME

We are delighted that thanks to the latest high-definition digital technology, this iconic image is now available as part of Robert’s series of Giclée Canvas Proofs. Specifically produced to order, each copy is signed by the artist, individually numbered and stamped on the reverse, and issued with a Certificate of Authenticity.

Due to demand from collectors, Return From Schweinfurt is also be available as a highly exclusive Exhibition Proof. The extra-large size makes it an imposing centre-piece for larger spaces, such as reception areas, entrance halls, hangars or exhibition displays.