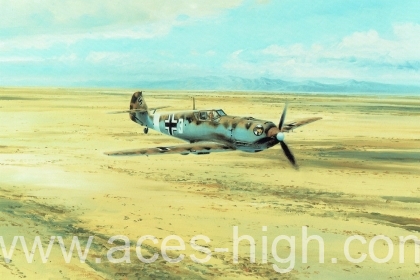 A classic masterwork by specially released from the archives of the Military Gallery.

With Mussolini’s army faring badly in North Africa, Hitler quickly recognised that he would have no option but to give his Italian ally substantial military assistance. It came in the form of Generalleutnant Erwin Rommel who, on 12 February 1941, landed in Tripoli ready to take command of a new German army being dispatched to Libya. Its name was soon to be famous around the world – the Afrika Korps.

Assigned to their support was I./JG27 under the command of Eduard Neumann, one of the most respected Luftwaffe fighter leaders of World War 2. The Gruppe was made up of veterans who’d taken part in the French campaign and the Battle of Britain so it didn’t take long for Neumann’s pilots to make their presence felt; on their first combat mission from Ain el-Gazala on 19 April they claimed the destruction of four RAF Hurricanes and in the process notched up the Gruppe’s 100th victory of the war so far.

With the arrival of the rest of the Gruppe from Russia at the end of 1941, JG27 would spend the next year defending Rommel’s front line in North Africa, their name indelibly linked to the Western Desert. And it was here that Neumann would mentor Hans-Joachim Marseilles who, awarded the Knight’s Cross with Oak Leaves, Swords and Diamonds, scored all but seven of his 158 victories in the Western Desert to become one of the highest-scoring Luftwaffe Aces in history.

Previously unreleased, Desert Warrior was painted in 1986, a period of his carrer that included some of Robert’s most famous Luftwaffe pieces such as JG-52 (1986), Ace of Aces (1988), Swansong (1988), The Abbeville Boys (1989), Stuka (1990) and Gathering Storm (1990). Robert fittingly depicts a Bf109 from I./JG27 near their base in north-east Libya, a small dusty village near the coast called Ain el-Gazala, from which they were tasked to protect the Ju87 Stukas attacking the encircled British army in Tobruk, just 40 miles away.

As with many of Robert’s early and long sold-out editions, the prints have been signed by an astonishing collection of Luftwaffe veterans which is now impossible to replicate. Included is the legendary Eduard Neumann himself, along with Aces who flew in combat with him in the Western Desert, creating a historic collector’s piece that is destined to become an instant classic.

Joining artist Robert Taylor in signing every print are four highly respected Luftwaffe Aces who flew Bf109s with JG27 in the desert:

Each signed print is issued conservation matted to include the original autograph of a further Luftwaffe Ace who flew in Africa during WWII:

With the serious collector in mind, these two very exclusive editions will include a hand-crafted original pencil drawing by Robert Taylor. Each exquisite remarque drawing will be individually created on a separate sheet of paper and delicately set into the conservation matting with all components of the Collector’s Edition to create a completely unique piece.

Limited to just fifteen copies worldwide plus ten DOUBLE remarques – with a much larger and even more elaborate drawing – collectors have the opportunity to acquire a highly sought after original work by the world’s most collected aviation artist.