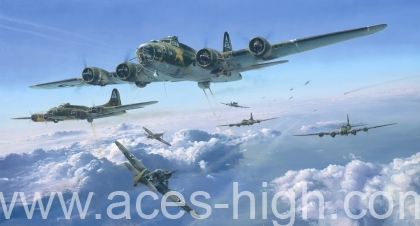 Briefing at 0500 hours on the morning of 14 October 1943 brought the crews of the 92nd Bomb Group news they didn’t want to hear: “It’s Schweinfurt again!” The same message was being repeated in USAAF bomb group briefing rooms all over eastern England in the early hours of what was to become forever known as “Black Thursday”.

High over Germany, beyond the range of Allied fighter cover, the unprotected B-17s come under relentless attack from enemy fighters. Losses are high. Undeterred, the valiant crews press on to the target, their relentless determination and courage on that “Black Thursday” forever etched into aviation folklore.

Each has been signed by THREE pilots, all veterans of the second Schweinfurt mission on 14 October 1943, including the mission command pilot Kemp Maclaughlin:

Each print has been individually signed by an additional seven veterans from the second Schweinfurt mission making a total of TEN signatures:

This historically important Commemorative Proof Edition is issued with Robert Taylor’s companion drawing ‘Black Thursday’, signed by a Luftwaffe veteran of the second Schweinfurt raid; this significant tribute edition is also signed by additional USAAF B17 veterans who flew and fought on the mission. In total there are no less than TWENTY-FOUR signatures on the edition.