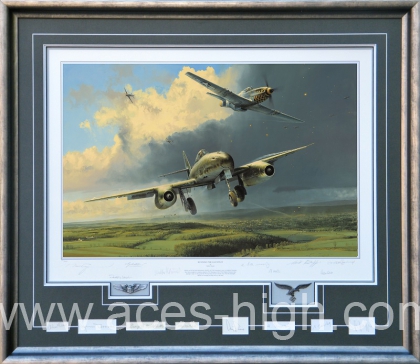 Almost out of fuel and ammunition, Me262s of JV44 returning to base in southern Germany, have been caught in a surprise attack by P-51 Mustangs of the 353rd Fighter Group as they attempt to land. At this point the P-51 has been forced to break away from the damaged Me262 as covering Fw190s arrive in the area.

Despite their superior speed, the Me262s were most vulnerable when coming into land as they had little option but to complete their sequence – an opportune time for American fighter pilots to catch them. Robert’s superb piece masterfully captures this scene and given the famous list of veterans who have signed the edition, this is already considered one of his classic releases.

This War in Europe Edition print has been personally autographed by eight famous USAAF and Luftwaffe fighter Aces who battled in the skies over Europe during WWII. To create a really unique piece, this print has been conservation framed by our expert team to include a museum quality reproduction USAAF and Luftwaffe wings along with the ORIGINAL signatures of a further eight famous P-51 and Me262 pilots.

This outstanding SIXTEEN signature collector’s piece acts as a tribute to the air battles that took part between the USAAF and Luftwaffe during WWII and would be a centrepiece of any collection: