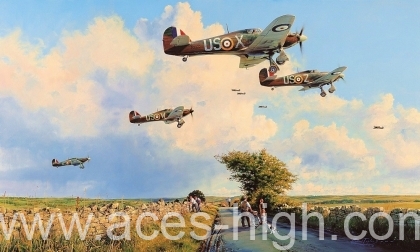 Throughout the long hot summer of 1940 the destiny of the British Isles, indeed the future of Europe, laid in the hands of a small band of young RAF fighter pilots. Against them stood the vast aerial fleets of an all powerful Luftwaffe, gloating and confident from its victories in Poland, France and the Low Countries. Lying in wait across the Channel, anticipating an easy victory by its air force, were the armies of the most powerful tyrant the world had ever known.

With Europe already succumbed to Nazi rule, Britain was alone, the last bastion among free nations to stand against an evil empire bent upon world domination. The battle, the first ever to be fought entirely in the air, would change the course of history, whatever the outcome.

Outnumbered more than five to one at the outset, the odds were so heavily stacked against the RAF, the task looked almost hopeless. But as the ferocious aerial battles continued through the long summer months, the tactical skills, devotion and raw courage of the RAF's young flyers, gradually turned the tide. By September end, the battle was won and the defeated Luftwaffe retired to its' plundered territories to lick its wounds.

Robert Taylor's magnificent study of the legendary Hawker Hurricane captures wonderfully the spirit of that cataclysmic aerial conflict fought so long ago. Nearest, young Pilot Officer Geoffrey Page, later to become one of the RAF's most highly decorated fighter aces, powers his Mk I Hawker Hurricane over the country lane at the edge of the airfield, as he and his fellow No 56 Squadron pilots make their third scramble of the day.

Glorious Summer, the second edition in Robert Taylor's acclaimed and popular Battle of Britain Trilogy, comprises just 500 copies world-wide, each signed by six Battle of Britain Hawker Hurricane pilots, and is published with an exclusive issue of just 250 Millennium Proofs, each signed by famous fighter pilots who fought in the historic Battle of Britain. As the world's premier aviation artist pays tribute to Churchill's gallant "Few", collectors will recognize the importance and value of adding the: fine portrayal of the Hurricane to their collections.

Each print in this edition has been personally signed by the following Battle of Britain Hurricane pilots:

Each copy of the Millennium Proof is also signed by the following:

Each Remarque includes an exclusive and unique original drawing by Robert Taylor on the border of the print.  Each Remarque is additionally signed by: