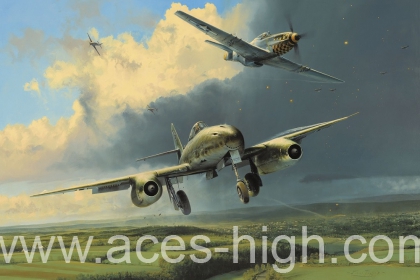 Robert’s superb painting shows Me262s of JV44 returning to base in southern Germany, having come under attack from P-51 Mustangs of the 353rd Fighter Group. Almost out of fuel and ammunition, the Me262s have little option but to complete their landing sequence, hoping fervently they are not “bounced” by American fighters loitering in the area.

They are out of luck on this occasion, and although Galland has organised a unit flying Focke-Wulf Fw190D-9s to provide air cover in the area of the airfield, they too have been caught by the 353rd Fighter Group’s surprise attack. At the relatively slow speed required on final approach, the Me262’s handling is sluggish and the pilot is having enough trouble without the attentions of a bunch of P-51 pilots. At this point the JV44 Me262 remains unscathed, and with the arrival of the Fw190s, there is the possibility this particular jet pilot will survive the day.

The War in Europe Edition

The EIGHT signature WAR IN EUROPE Edition is additionally signed by the following four fighter Aces.

With all the signatures of The ‘War in Europe Edition’, the ‘Generals Edition’ is signed by the following additional fighter Aces. Furthermore each individual print was signed in pencil during his lifetime by General Adolf Galland. There are a total of TWELVE signatures in this highly collectible edition.

The Porfolio Proofs - The Concept Drawing

With all the signatures of the ‘Generals Edition’, the ‘Portfolio Proofs’ are issued with the exclusive matching numbered working concept drawing for ‘Running the Gauntlet’. The drawing, signed by Robert Taylor, is conservation matted to include the original pencil signatures of two of the greatest exponents of the Me262 – ‘Macky’ Steinhoff and Walter Krupinski. The main print is also signed by ‘Herky’ Green, making a total of FIFTEEN signatures in this genuinely remarkable collectors edition.