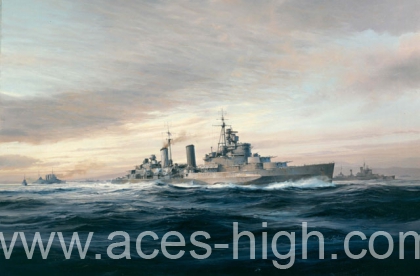 Once the largest and most powerful cruiser in the Royal Navy, HMS Belfast fought throughout World War II. As part of the Home Fleet based in Scapa Flow she took part in the Arctic convoys and, on Boxing Day 1943, fought with distinction in the Battle of North Cape, playing a pivotal part in the sinking of the German battleship Scharnhorst. In June 1944 she was off the coast of Normandy bombarding enemy positions during the D-Day landings. She later saw action in the Far East, and again in the Korean War, ending her active days in 1963 when she went into the Reserve Fleet.

But that wasn’t the end. Today, in contrast with her action-packed service days, the Belfast lies quietly moored on the River Thames in London, a floating – and highly popular - exhibit for the Imperial War Museum.

Robert Taylor, however, went back to Belfast’s ‘glory days’ in 1943 for his moving depiction of this iconic warship. Recently repaired and refitted, the artist portrays her as she departs Scapa Flow for the icy waters of the Arctic. Now under the command of Captain Freddie Parham, she presents a highly potent symbol of the Royal Navy during WWII.

In a great stroke of luck, when prints of this fascinating historical painting were published in 1980, the by now ‘Admiral Sir’ Freddie Parham was so moved by the sight of his former command on canvas, that he insisted on signing all the prints!