OKINAWA - Towards The Bitter End 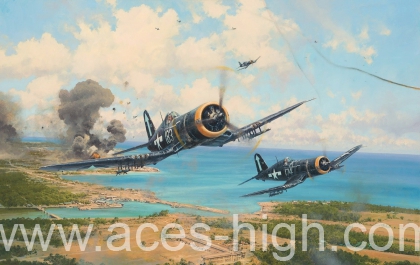 In Europe the endgame was fast approaching as the final remnants of Hitler’s Third Reich disintegrated within the shattered ruins of Berlin. But in the Pacific the war against the Japanese was far from over – if anything the savagery was intensifying.

Following their victory at Midway, American forces had fought a long, bloody and bitter campaign to retake the Japanese held islands in the Pacific. By the end of March 1945, however, they had finally captured Iwo Jima and looked towards Okinawa, a province of Japan itself. Less than 400 miles south of its mainland, it was the place from which the Allied invasion of Japan must be launched. Supported by a huge Naval presence, including one of the largest British fleets ever assembled, the assault began on 1 April 1945 with the largest amphibious landing of the Pacific war.

The Japanese response was ferocious seeing the peak of the kamikaze scourge and while the British ships with their steel decks fared much better, the relentless attacks took their toll on the US Fleet, highlighting a conflict worse than anything seen before. The 82 day battle was one of the most severe and bloody campaigns of WWII, accounting for over 14000 Allied deaths and five times that number of Japanese soldiers.

In one of the most powerful paintings of his long and distinguished career, Robert Taylor depicts USMC Ace Dean Caswell and F4U Corsairs from VMF-221, based on the carrier USS Bunker Hill, climbing away from the target area after delivering a blistering rocket attack on enemy positions on Okinawa.

The prints in this outstanding edition are personally signed by legendary Pilots and Aces who flew Corsairs during the assault of Okinawa, including Dean Caswell, creating a unique collectors piece. Parts of the edition are also autographed by Army and Navy veterans who fought at Okinawa, giving enthusiasts the rare opportunity to acquire a remarkable historic account of one of the greatest battles of WWII, and an important piece to be cherished by future generations.

Joining Robert in signing every print are two distinguished Pilots who flew F4U Corsairs at Okinawa, including the Ace who is depicted in this dramatic piece:

Each print in this TEN signature edition is additionally signed by eight Corsair Pilots who flew in combat during the Battle of Okinawa:

To commemorate all those who took part in the most bitter campaign of the Pacific War, each print in this FIFTEEN signature edition has also been signed by five further veterans who fought at Okinawa:

Each print will be enhanced with a unique and highly collectible ORIGINAL pencil remarque, hand drawn in the lower margin of the print, creating a sought after collector's piece.

These SEVENTEEN signature editions are signed by a further two veterans of the Okinawa Campaign:

With all the signatures of the Remarque Editions every print is issued with a beautiful original pencil drawing which is personally signed by two Royal Navy Fleet Air Arm fighter pilots who flew Corsairs at Okinawa:

Each drawing is conservation matted to include the highly-prized signatures of three of the greatest US Marine Corps Aces who flew at Okinawa: