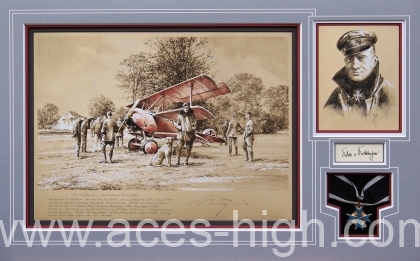 For decades the name Robert Taylor has been synonymous with aviation art and today his unique ‘painterly’ style has led him to be widely regarded as the world’s premier aviation artist. Many of the limited edition prints reproduced from his famous paintings and drawings are regarded by collectors and enthusiasts as some of the most sought-after images of the genre ever published.

Now, introducing a new dimension to the world of collecting, Robert has completed the first in a new series of ground-breaking artworks dedicated to some of the most famous aviators of the First and Second World Wars.

He begins with one of the most legendary figures of World War One, Manfred von Richthofen. Nicknamed ‘The Red Baron’, Manfred von Richthofen became leader of JG1 in June 1917 and was the highest-scoring Ace of the First World War with 80 confirmed victories, all scored over the Western Front between September 1916 and April 1918. He took to the air for the last time on 21 April 1918 when, flying his iconic scarlet-painted Fokker DR1 tri-plane, he was killed by a single bullet during a low-level dogfight over the Somme.

Featuring a main study of ‘The Red Baron’ beside his famous aircraft, the first portfolio released in Robert’s ‘Icons of Flight Collection’ includes a second, completely separate matching-numbered piece – a stunning portrait of von Richthofen himself. Both drawings have been reproduced as highly-restricted Giclée proofs printed by one of Europe’s most respected Giclée master printers who, with over a decade of experience, create proofs only to the highest European standards of certified digital print-making using stunning archival papers.

That, however, is only the beginning; now it is the artist himself who takes over proceedings, transforming each of the matching proofs into individual works of art through the delicate application of subtle embellishments, elegant highlights and refined tonal applications of muted colour wash. Only then, when Robert is entirely satisfied with the finished result, does he title and caption each work before signing and hand-numbering each of these individual and unique pieces.

Both drawings are exquisitely mounted to full conservation standards in a single composition that includes an ORIGINAL and fully authenticated autograph of ‘The Red Baron’ along with a museum-quality reproduction ‘Pour le Mérite’ or ‘Blue Max’ medal which, at the time Richthofen received it in January 1917, was the highest military honour in Germany.

The portfolio is then completed with a hard-back copy of Norman Frank’s highly-regarded book ‘The Red Baron – A History in Pictures’.