THE EAGLES DIVIDE - The Masterwork Drawing 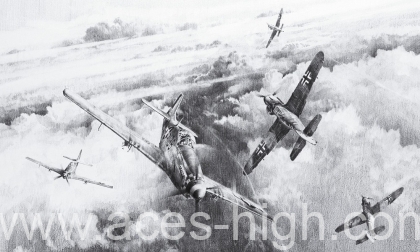 It had begun; the end game was inexorably in play. The final defeat of Germany and the end of Nazi tyranny was almost within sight but in the skies over Germany the defiant remnants of the Luftwaffe fought on with savage determination. Ever since the long-range American P-51 escort fighters had first appeared, the skies over the Reich had witnessed grim encounters with the Mustangs taking on the Luftwaffe as they tried to stop the heavy bombers of the USAAF reaching their targets. By early 1945 it was a losing battle, but still the Luftwaffe fought on and, in the resulting maelstrom of combat, the Mustang pilots still had their work cut out against these battle hardened, expert pilots

Robert Taylor’s superb drawing, part of his much-acclaimed Graphite Series, dramatically reconstructs one such clash in early 1945 as P-51 Mustangs of the 357th Fighter Group have spotted a group of Bf109s heading their way. Without hesitation they dive head-on in an attempt to break-up the enemy formation and for the pilots on both sides the explosive encounter of close combat is suddenly upon them.

Limited edition prints of this classic Robert Taylor Master Drawing have been signed over the last few years by some of the most respected USAAF Mustang and distinguished Luftwaffe pilots who duelled in those merciless skies over Europe. Since signing the prints some of these legendary names have very sadly passed away, making it one of the most collectible editions of recent years.

The complete edition is signed by the artist and two of the 357th Fighter Group's most famous P-51 Aces:

Amongst the many famous names who duelled over the skies of Europe are two of the best known Luftwaffe Aces who have also personally signed this edition:

The Artist Proofs are additionally signed by the third highest scoring Ace of all time:

To represent the struggle between the Luftwaffe and the USAAF during this crucial time the Eagles’ Edition has all the signatures of the Pilots Edition plus a further six highly respected fighter pilots that flew on both sides.

Five additional Luftwaffe pilots, who flew and fought in the final days of the war have also signed this prestigious edition, creating a highly collectable SIXTEEN signature Collectors piece.

Each of these amazing Tribute Proofs is conservation matted to include the original pencil signatures of top P-51 Aces along with some of the most highly decorated and high scoring Luftwaffe Bf109 pilots that flew in WWII. The signatories on this piece amassed a staggering total of more than 1050 victories between them, providing a new benchmark for the serious collector.