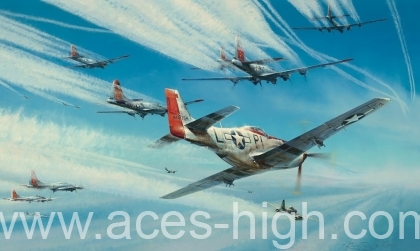 On 10 April 1945 thirteen hundred bombers of the Mighty Eighth set out to destroy the last of the Luftwaffe’s jet force. But, unknown to the bomber crews and their fighter escort, the enemy jets were already airborne and waiting to spring their deadly trap.

As the war in mainland Europe entered its final, bloody phase, the German Armies defending Berlin fought on with a savage determination, slowly disintegrating before the mighty weapon of war unleashed against them. What remained of the Luftwaffe was mercilessly pounded from the air, their airfields hammered relentlessly. Aircraft, fuel, spare parts, ammunition and pilots all in short supply but still they fought on, with deadly effect. At the forefront of the German offensive and pivotal during the defence of the Reich, were the highly advanced jet fighters of the Luftwaffe, and in particular the legendary Me262.

The scene portrays B17s of the First Air Division with streaming contrails in the cold clear air as they turn for home. Several Me262s have already torn through the massed formation. but a P-51 from the escorting 356th Fighter Group has quickly spotted his target and presses home his attack. The hunter becomes the hunted as the Mustang pilot, Wayne Gatlin, skillfully positions himself behind the Me262 ready for the kill.

Throughout the final stages of the war there were many examples of the determination and skill of Allied pilots flying slower piston-engined fighters triumphing over the cream of the Luftwaffe in their highly advanced but often temperamental jet fighters.

This classic edition has been authenticated with the original signature of Wayne Gatlin himself, alongside some of the Luftwaffe’s most famous exponents of the jet. In addition the prints are personally signed by a staggering number of WWII’s most experienced allied fighter pilots, all of whom had victories against the jets of the Luftwaffe – they were the Jet Hunters!

Every print in has been signed by three, highly-distinguished veterans who belong to that small, talented band of Allied fighter pilots to have scored a victory over a jet.

This outstanding TWELVE signature edition is issued with the magnificent pencil companion print BLACK NOVEMBER DAY and the main print is additionally signed by a further four pilots who scored victories over German jets:

With all the components of the Pilots Edition the main print in the strictly limited Artists Proofs are additionally signed by two USAAF Fighter Pilots who scored victories over German jets, creating an outstanding FOURTEEN signature edition:

Issued with all the components of the Artist Proofs, this TWENTY signature edition has been additionally signed by an Me262 night-fighter pilot and seven P-51 pilots, all with victories over Luftwaffe jets:

This incredible TWENTY-EIGHT signature edition contains all the elements found in the Jet Hunters’ Edition, but the main print is further signed by two P-51 pilots that scored victories over the Me262 jet.

The Ace of Aces Edition

This outstanding FORTY ONE SIGNATURE, matching-numbered, three-piece set comprises all the components of the Tribute Edition - the main print JET HUNTERS with all sixteen signatories and the matted companion drawing BLACK NOVEMBER DAY with all twelve signatures; However, included in this totally exclusive set is a highly sought after ORIGINAL pencil drawing by Robert Taylor featuring the P-51 and Me262 in combat.

Each one of these original drawings is unique in composition, and has been PERSONALLY signed by five of the foremost exponents of the Me262, all of them recipients of the coveted Knights Cross.