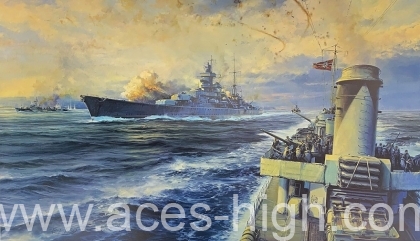 The Prinz Eugen was one of the finest and most famous ships in the German Kriegsmarine. In company with the mighty Bismarck, the battle-cruiser Prinz Eugen is forever remembered for her part in the sinking of the Royal Navy’s HMS Hood and later in the Operation Cerberus when she accompanied the battleships Scharnhorst and Gneisenau in the famous Channel Dash. The Prinz Eugen, however, was a magnificent fighting machine in her own right with a long, sleek hull and a superstructure packed with enormous firepower. Whenever she put to sea she posed a fearsome threat.

Although more widely known as an aviation artist, Robert Taylor has a long tradition of maritime painting behind him and OFFSHORE BOMBARDMENT is one of the most powerful and well executed naval paintings depicting events at sea during World War II. Unleashing her terrible broadside against Russian land positions in the Baltic during the final months of the war in 1945, Prinz Eugen is painted at her magnificent best. Although she survived the war – she surrendered at Copenhagen – her end was inauspicious, but no less historic. She was taken out to Bikini Atoll in the Pacific and used as a target in the testing of atomic bombs.

These impressive 36” by 24” pieces are beautifully printed and signed by two Kriegsmarine officers who served on the Prinz Eugen. And because we don’t think they signed much else, they remain extremely rare and highly sought-after by those collectors with an interest in the maritime events of WWII.

Each print is individually signed by the artist and TWO of Prinz Eugen's distinguished officers.