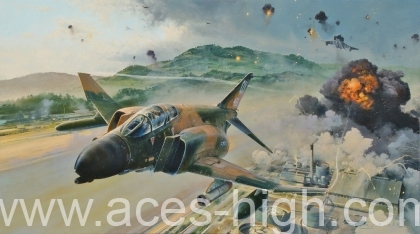 The biggest, fastest, most powerful fighter of its day, the McDonnell Phantom was an awesome war machine that came to dominate aerial combat for over two decades. It may have been the size of many World War II bombers but it could out-perform anything that crossed its path; The F-4 Phantom was the benchmark against which every fighter in the world came to be judged; it was simply the best.

Robert Taylor’s powerful painting depicts Steve Ritchie, first into action, flying his lead F-4D Phantom through a hail of deadly enemy flak as he exits the target area after a typical FAST FAC mission on enemy installations in North Vietnam, 1972. Behind him a vast trail of devastation marks the mission’s progress, as his fellow Phantom crews continue to wreak havoc with their heavy ordnance, the target area exploding in a series of mighty detonations.

This outstanding masterpiece is the long awaited third and final 'follow up' to Robert's previous editions, Phantom Strike and Phantom Showtime.

Every print in the edition is personally signed by a legendary Vietnam USAF fighter Ace and a special guest signer, a fellow highly distinguished 'Triple Nickel' combat pilot: