HIGH OVER THE WESTERN FRONT 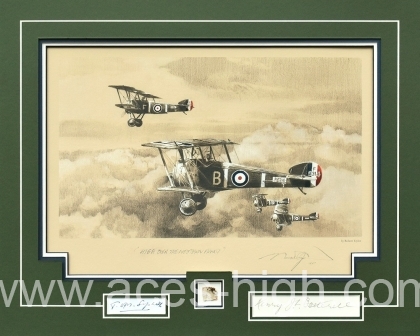 The Royal Air Force was formed on 1 April 1918 when the British Army’s Royal Flying Corps and the Royal Naval Air Service, administered by the Admiralty in Whitehall, amalgamated to form the world’s first independent air force. From that date until the end of hostilities, the RAF fought with great distinction over the Western Front. By November 1918 it was the largest and most powerful air force in the world with nearly 23,000 aircraft and 290,000 personnel.

For over a century the RAF has now served with distinction around the world, no more so than in World War II when the very future of Britain lay in its hands during the Battle of Britain. Fighter Command’s famous victory against the Luftwaffe in the summer of 1940 was followed by an endless list of gallant actions such as Bomber Command’s audacious Dambusters raid in 1943. In more recent times the RAF has been at the forefront of Allied air operations including the Gulf War, Kosovo and Afghanistan.

To remember the Royal Air Force’s long and illustrious century of service, Robert Taylor, long admired as the world’s premier aviation artist, has created this highly detailed graphite work ‘High Over the Western Front’ that takes us back to the year the RAF was formed, 1918. Featuring the most successful British fighter of World War I, Robert’s stunning colour-enhanced artwork depicts Sopwith Camels of the newly- established RAF on patrol over the Western Front in support of the successful Allied response to the German Spring Offensive of 1918.

To quicken the hearts of all aviation art collectors and enthusiasts of the Great War, we are excited to announce that in addition to its publication as a signed limited edition print, High Over the Western Front is issued with the original and highly sought-after original signatures of two famous aviators who are not only remembered in history books for their influence on the outcome of the First World War, but helped shape the success of the Allied push for victory during World War Two and long after.

Each print in this highly-restricted edition is hand signed and personally titled by artist Robert Taylor and is issued matted to full conservation standards to include an original fragment of WWI aircraft madapolam fabric skin and the fully-authenticated signatures of two famous First World War aviators:

Sir THOMAS O. M. SOPWITH CBE Hon FRAeS (1888 – 1989)
The founder of the Sopwith Aviation Company responsible for producing more than 18,000 Allied aircraft during WWI. He was later Chairman of the Hawker Siddeley Group who designed and manufactured aircraft throughout and after WWII.

Flight Lieutenant HENRY J. L. BOTTERELL (1896 – 2003)
A pilot on 91 sorties over the Western Front during WWI with No. 8 Naval Squadron who later re-named 208 Squadron RAF. Flying a Sopwith Camel he scored an aerial victory over a German observation balloon in 1918 and during WWII trained young pilots in the Canadian Air Force.