FLYING TIGERS - THE STUFF OF LEGEND 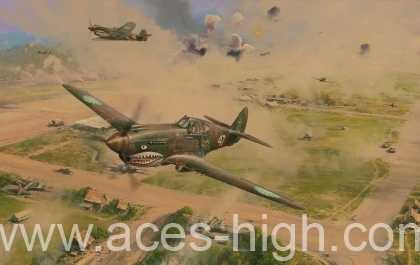 P-40's of the AVG Flying Tigers 3rd Pursuit Squadron - Hell’s Angels - surprise the enemy with a deadly strafing attack on a Japanese forward air-base in China, summer 1942. With their Allison engines screaming at full throttle, AVG Aces Tommy Haywood and Robert Smith, lead the charge as the Hell’s Angels leave a trail of havoc and destruction behind them.

Robert Taylor has created a masterpiece to honor all of the ‘Flying Tigers’ and his outstanding painting portrays a typical scene in this distant war fought by that small band of warriors.

The release is autographed by legendary Aces including four of the AVG’s most respected pilots who, since signing, have sadly passed away; giving even greater meaning to this edition. We are delighted that this historic commemorative edition is now released in tribute to this immortal unit, providing aviation art connoisseurs with a true collectors piece.

Every print in each edition is personally signed by the artist Robert Taylor together with FOUR legendary AVG Flying Tigers:

The Collectors Edition and Remarques

With all the components of the Limited Edition, each print in these six signature editions is issued with an exclusive matching-numbered companion drawing - TIGER ATTACK - personally signed by the artist and two highly respected Flying Tiger fighter pilots who flew with the 23rd Fighter Group:

This rare and historic THIRTEEN signature tribute to the Flying Tigers is released with all the elements of the Collectors Edition but, in addition, every print is accompanied by an ORIGINAL pencil drawing individually created for this edition by Robert Taylor. Each drawing is conservation matted to include the original signatures of seven of the most famous Flying Tiger Aces: