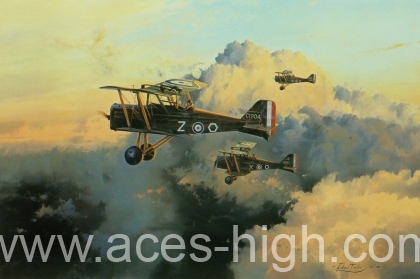 Billy Bishop and the pilots of 85 Squadron climb their SE5A fighters into the cool morning sunlight above the fields of Northern France on June 16, 1918.

A tough Canadian, Billy Bishop was considered an outstanding fighter pilot endowed with great courage. Though he led 85 Squadron with distinction, he preferred to fight his air combats single-handed. Indeed he was awarded the Victoria Cross when, on one of his solitary forays, he attacked an enemy airfield at dawn shooting down three aircraft as they took off. Unlike many of his contemporary aces, Bishop survived the war and returned to Canada with 72 victories.

Every print has been personally signed by the artist as well as two fighter Aces who flew the SE5A in combat during the First World War:

We also have a handful of copies available which have been additionally autographed by the following 12 Squadron RFC Observer / Air Gunner: