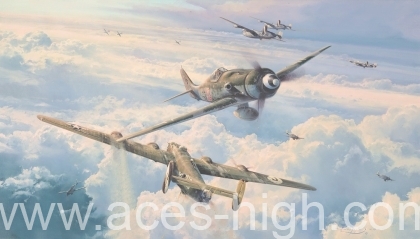 The weather on the morning of 31 December, 1944 was already unpleasant. In the Ardennes, hard-pressed German troops were battling Allied ground forces advancing through several inches of snow. Above, darkening skies heralded the arrival of more snow. At 10.45am, in deteriorating weather, a battle formation of 30 Fw190D fighters climbed out of Varrelbusch and headed south over the snowcovered landscape.

Under the command of 12./JG54 Staffelkapitan, Oblt. Hans Dortenmann, and initially tasked to provide air cover to their beleaguered comrades below, the group was re-assigned to intercept enemy aircraft in the region of Limburg almost immediately the pilots were airborne. Flying south they ran directly into the oncoming weather, and with visibility dangerously reduced, Dortenmann elected to climb through the solid cloud into clear air. As the Fw190s broke cloud above the area of Koblenz they sighted a formation of nine 2nd Air Division B-24 Liberators and formed up for an attack. Some 6000 feet above, top-cover P-51 Mustangs had watched the Fw190s climbing through the banks of clouds, and turned 180 degrees to position behind the Luftwaffe fighters. Diving in from their height advantage, the Mustang pilots entered the fray and within seconds the sky was filled with swirling dogfights.

Every print in this edition has been signed in pencil by THREE top pilots who flew with JG54 - The Green Hearts. Each print is also signed by artist Robert Taylor, and individually hand-numbered.

The Green Heart Edition has also been signed by the following four JG54 Aces, and three pilots from the 453rd Bomb Group USAAF, to give a total of TEN signatures in this edition.

Artist Robert Taylor has kindly agreed to create just TEN ORIGINAL PENCIL DRAWINGS to commemorate JG54- one of the most illustrious Geschwader to fly with the Luftwaffe during World War II.

Exclusively crafted with a delicate and sympathetic beauty, each of these original works of art is signed by Erwin Leykauf, the highly respected Adjutant of III./JG54 and IV./JG54, together with the artist. Each original drawing is conservation matted to the highest standards to include the ORIGINAL and genuine signatures of two of the most outstanding and highly respected Luftwaffe commanders of World War II - Walter Nowotny, Kommandeur of I./JG54 and Hannes Trautloft, Kommodore of JG54. These leading figures from JG54 amassed between them a total of 348 victories. Issued with a personally numbered copy of SAVAGE SKIES, this THIRTEEN signature Tribute Edition, limited to just ten copies, is perhaps the most exclusive edition ever to be released.