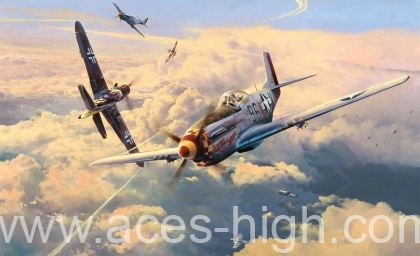 JANUARY 1945: If the Allies had air superiority, nobody had told the determined pilots of the Luftwaffe, because the skies over Germany were both dangerous and deadly.

Robert’s iconic scene depicts a dramatic clash between the USAAF and the Luftwaffe high over the Rhineland. P-51 Mustangs of the 357th Fighter Group, escorting a heavy bomber raid deep into enemy territory, have engaged a strong force of Me109s and a massive dog-fight has developed. Captain Robert Foy of 363rd Squadron engages one of the Me109s in a daring head-on pass whilst P-47 Thunderbolts of 56th Fighter Group climb to give support.