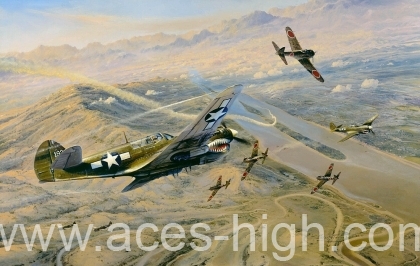 On August 5, 1944, following a successful attack on Japanese forces just north of Changsha, P-40 Warhawks of the75th and 16th Fighter Squadrons, 23rd F.G., are attacked by enemy Nakajima fighters and a massive dog-fight has developed over the Hsiang Chiang river with aircraft wheeling and turning in all directions. The action is set against the distinctive, haunting landscape of Southern China, Robert's panoramic canvas capturing all the atmosphere of a crucial aerial campaign fought in the skies above a distant land so many years ago.

Each copy in this edition is issued with the companion pencil print: Tigers on the Prowl.

In addition to the artist, each print in this addition has been hand-signed by:

Each print in the EIGHT signature A.V.G. Folio Edition has been additionally signed by: