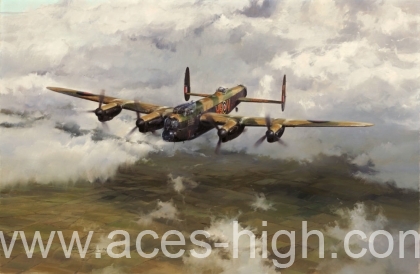 One aircraft above all came to symbolise the heroic role undertaken by the young men of RAF Bomber Command during WWII – the mighty Avro Lancaster. Introduced in early 1942, it quickly became the backbone of Bomber Command and it wasn’t long before a score of airfields across the east of England reverberated to the sound of its four mighty Merlin engines.

Robert's memorable piece recreates a scene that was familiar to anyone in Bomber Command. A lone 9 Squadron Lancaster, separated from the main force during a punishing mission to Germany in late 1944, returns to safety. The weary crew are no doubt relieved to see familiar fields beneath them as they approach their base at RAF Bardney, Lincolnshire.

Published from the Military Gallery archives in 2018, this Collector's Edition was signed at the time by eight veterans who flew Lancasters during WWII. However, over the years we've managed to have just a few copies additionally signed at events by a further four Lancaster veterans, creating a completely unique TWELVE signature collector's piece.

BE QUICK! Only three multi-signed copies are available and for a limited time only we're charging no extra for these additional signatures! Order your TWELVE signature Collector's Edition for the same price as the eight signature version.