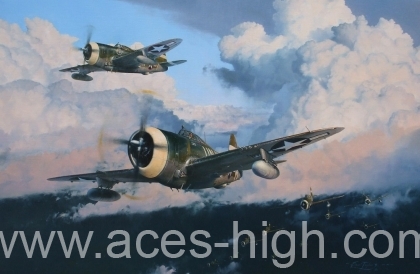 Captain Walker ‘Bud’ Mahurin in formation with P-47 Thunderbolts of the 56th Fighter Group – “The Wolfpack”, climbs out through majestic clouds high above the east coast of England as they prepare to escort B-24 Liberators of the 392nd Bomb Group on a mission to the German port of Bremen, 26 November, 1943. A tough battle with the Luftwaffe lies ahead, but today the escorting “Wolfpack” will claim an ETO record, destroying more enemy aircraft in a day than any other fighter group and Mahurin will add three more victories to his tally, to become the leading Ace in the Group. The bombers have none better to protect them.

A stunning painting from the world’s foremost aviation artist personally signed by a staggering number of original Wolfpack veterans - this has to be the greatest tribute to the 56th Fighter Group ever produced.

Each print in this edition is personally signed by THREE highly respected 56th Fighter Group Pilots:

This NINE signature edition is additionally issued with Robert Taylor's pilot signed companion print 'A Pack of Wolves' and signed by the following:

This outstanding collectors piece is released with all the components of the Artist Proofs, but each companion print 'A PACK OF WOLVES' is further signed and matted to museum quality to include the signatures of the three most famous Aces associated with the 56th Fighter Group. This edition has a total of SEVENTEEN signatures.