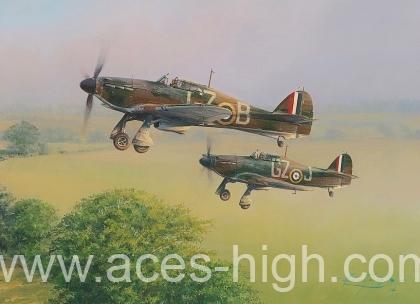 You can almost hear the roar of their mighty Merlin engines and feel the prop-wash in Robert Taylor’s commemorative new salute to the Hawker Hurricane. His classic portrayal of this much-loved fighter depicts a pair of Mk.I Hurricanes from 32 Squadron leading the scramble away from their forward airfield. Often making three, four or five such scrambles a day at the height of the battle, this time they are racing to intercept Luftwaffe intruders who have been spotted crossing the Kent coast.

The prints in this fabulous cameo release are signed by a number of the ‘Few’, the men who fought and won the Battle of Britain and who the head of RAF Fighter Command, Air Chief Marshal Sir Hugh Dowding, simply called his brave ‘fighter boys’.

Joining artist Robert Taylor in signing each print, the Limited Edition has been personally autographed by two highly regarded Battle of Britain veterans:

The FIVE signature Collectors Editions are additionally signed a further three famous Aircrew who flew and fought in the Battle of Britain.