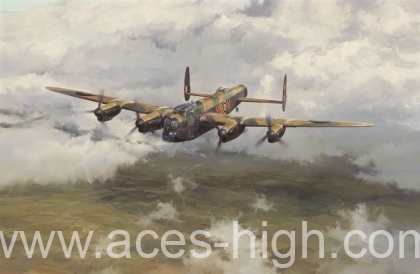 A classic Masterwork from the world’s foremost aviation artist, released to commemorate the 100th Anniversary of the Royal Air Force.

Every print has been signed by highly respected veterans who flew with Bomber Command during WWII, including two who flew with 9 Squadron, creating a historic collector’s edition to commemorate this important anniversary.

Joining Robert Taylor in signing every print are two highly-regarded RAF Bomber Command veterans who flew Lancasters on operations over Europe during World War II, including a Rear Gunner who served with 9 Squadron:

Each print in these historic eight signature editions is additionally signed by a further six distinguished RAF Bomber Command veterans including a Mid-Upper Gunner who served with 9 Squadron:

With all the signatures of the Collector’s Edition, each print is issued with a specially commissioned original pencil drawing by Robert Taylor which has been signed by five highly distinguished veterans who flew with RAF Bomber Command during WWII. Each drawing is conservation matted to include the original signatures of a further four famous Bomber Command veterans, including its legendary Commander in Chief, Arthur ‘Bomber’ Harris: