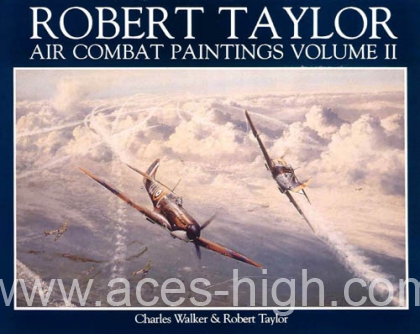 His first book, THE AIR COMBAT PAINTINGS OF ROBERT TAYLOR, published in 1987, became an instant best-seller and has since sold more copies than any aviation art book ever published.

This second volume of air combat paintings features a collection of Robert Taylor’s work, painted between 1987 and 1990. A number of great pilots have contributed their own personal recollections, including first-hand accounts of the aircraft they flew in combat. Each of the 24 paintings is reproduced in full colour and discussed within a separate four-page chapter, providing in-depth visual and verbal studies of some of Taylor’s most popular paintings. The artist’s revealing comments are supported by a wealth of colour detail and superb pencil sketches.

Taylor’s original paintings are to be found hanging in the Imperial War Museum, the RAF Museum, the Fleet Air Arm Museum, the International Aerospace Hall of Fame, the Smithsonian’s National Air and Space Museum and the Australian War Memorial Museum.