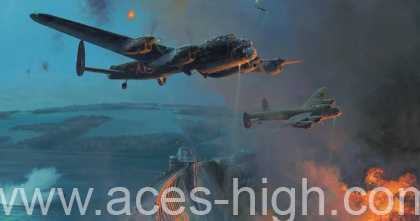 In the history of air warfare few missions come close in terms of courage and the highest skills of precision flying to the one carried out by 617 Squadron on the night of 16/17 May 1943. Codenamed Operation Chastise, their mission was to destroy the great dams that were vital to the industries of the Ruhr and, to do so, they would use a radical new weapon designed by Barnes Wallis – a ‘bouncing bomb’ that would ‘skip’ across the water before detonating against the dam wall.

On the night of 16 May, after seven weeks of intensive low level training, nineteen crews flew their Lancaster Bombers from RAF Scampton to carry out what became one of the most legendary missions of all time. The result was the destruction of the Möhne and Eder dams.

Robert Taylor’s outstanding painting depicts a moment at the height of the successful attack on the Möhne Dam, the first of three primary targets that night, as ‘Dinghy’ Young powers Lancaster AJ-A over the wall of the dam just after releasing his bouncing bomb.

Commanding Officer Guy Gibson, flying high with lights on to draw enemy flak, noted that Young’s bomb made “three good bounces” before successfully detonating against the dam wall to trigger its collapse. David Maltby in AJ-J will shortly deliver the final, decisive blow.

Joining artist Robert Taylor in commemorating the legendary Dambuster Raid, every print in this magnificent edition has been personally signed by three veterans who were directly involved with the operation, including the RAF’s last surviving veteran, George ‘Johnny’ Johnson:

With all signatures of the Limited Edition, this EIGHT signature edition has been additionally signed by five veterans who all served with 617 Squadron and played significant roles on the night of the raid.  This superb edition offers a personal link to the last courageous people to take part in this famous mission.