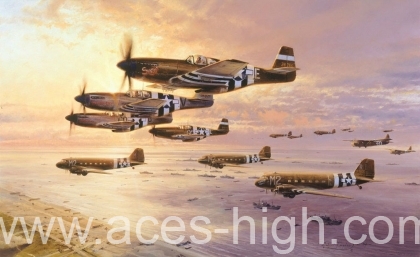 It began shortly after midnight on 6 June 1944 when two American and one British Airborne Division started to drop en-masse into Normandy. Their mission: to secure the flanks for the mighty amphibious armada heading towards the invasion beaches. As dawn broke to reveal the bullet-swept beaches below, overhead the skies were still filled with troop-carrying aircraft towing gliders heading for the drop zones.

Robert Taylor’s iconic masterpiece D-Day - The Airborne Assault has been hailed by many leading veterans as the most realistic portrayal of D-Day air events rendered by any artist. Seen crossing a section of the invasion beaches, and closely escorted by P-51Bs of the 354th Fighter Group, C-47s of the 438th TCG tow CG-4 Waco gliders bringing in yet more reinforcements for the 82nd Airborne Division.

Originally created in June 1994 to commemorate the 50th Anniversary of the invasion, D-Day Airborne Assault became one of the most collectible limited Aviation editions ever published and sold out shortly after release. It is fitting therefore that it is the now enhanced by the creation of a GICLÉE STUDIO PROOF ON CANVAS during the 70th Anniversary year of the Normandy Campaign