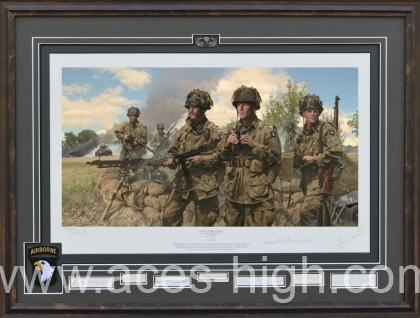 It had been a rough ride in for the men of Easy Company. Their C-47s had run into heavy German flak as they crossed the French coast, their commanding officer had been killed and when they'd finally hit the silk they, like much of the 101st Airborne, had been dropped off target. Men, weapons and supplies were scattered, but in a few hours’ time elements of the largest amphibious force in history would be hitting Utah Beach. The area behind the beach must be secured.

Simon Smith's evocative composition portrays the scene shortly afterwards as the men of Easy Company await orders from their new commanding officer. The young lieutenant, whose leadership and tactical skills will, over the next few months, become legendary, carefully considers their next objective - the advance through Normandy towards Carentan.

Released back in 2012 and now at extremely low inventory, this superb print was personally signed on publication by Easy Company veteran 'WILD BILL' GUARNERE who took part in the assault at Brécourt Manor, and Emmy Award winning Actor DAMIAN LEWIS who portrayed Dick Winters in the acclaimed TV mini-series Band of Brothers.

Framed to full conservation standards, we're delighted to have ONE COPY ONLY that includes museum-quality reproduction U.S. Jump Wings, a 101st Airborne pin and an additional seven original autographs of veterans who served with this famous unit during WWII!