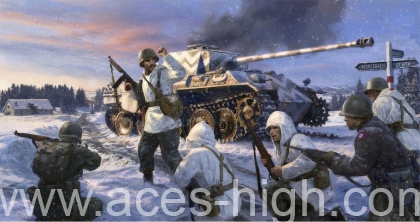 Snow was falling and it was bitterly cold as First Lieutenant James ‘Maggie’ Megellas brought his weary platoon to an abrupt halt. Quietly he ordered his men down – something was wrong.

It was Sunday 28th January 1945 and, in the aftermath of the Battle of the Bulge, he and his small unit had been advancing all day along heavily wooded, snow-clad tracks towards their objective - the small town of Herresbach. Almost immediately he spotted movement. Advancing out of the town through the tree line ahead, and oblivious to the American’s presence, was a large force of German infantry.

Megellas realized they were heavily out-numbered and that surprise was their best weapon. Seizing the moment, the American paratroopers charged the unsuspecting enemy, firing from the hip. Caught off-guard the dazed Germans were routed and within minutes over a hundred enemy lay dead, the survivors threw down their weapons and surrendered. Incredibly not a single American had been killed or injured.

But the day’s action wasn’t over: the unmistakable sound of heavy armor now carried across the snow-covered battleground as a German MkV Panther tank lumbered ominously towards them. With total disregard for his own safety, Megellas single-handedly charged the steel monster, placing a grenade into one of its tracks he disabled the tank, before throwing another grenade inside, eliminating the crew.

For this selfless and heroic act Megellas was immediately nominated for the Medal of Honor. The regimental account of his action, however, was somehow omitted from the official battle report and instead he was awarded the Silver Star.

Simon Smith’s dramatic new image Act of Valor, picks up the story as, with the Panther rendered harmless, Megellas readies his men for their final advance into Herresbach.

This is an historic release and ‘Maggie’ Megellas – who gave his own unconditional approval to Simon’s stunning rendition – has personally signed every print in this new edition as a living reminder of one of the most inspirational stories of World War II.

Joining artist Simon Smith every print has been personally signed by one of the great heroes of World War II:

Serving with ‘H’ Company for the duration of his war he first saw combat fighting in the mountains surrounding the city of Naples in southern Italy in 1943, where he was wounded and hospitalized. In January 1944 he took part in the amphibious assault at Anzio with the rest of the 504th where he was once again wounded during the savage fighting. The 504th PIR then re-grouped in England and in September 1944 Megellas jumped into Holland near Nijmegan on Operation Market Garden.

Taking part in the crossing of the Waal River in flimsy assault boats under heavy fire, Megellas single-handedly attacked and destroyed a powerful German machine-gun and Observation post, an action for which he was awarded the Distinguished Service Cross – America’s second-highest decoration.

From December 1944 his unit was heavily involved in the bitter fighting during the Battle of the Bulge and while advancing through the Belgian forests just outside the village of Herresbach on 28 January 1945, they surprised a large force of German infantry. During a ferocious frontal attack Megellas and his men, though hugely outnumbered, overwhelmed the enemy within minutes, killing more than 100 and taking a large number of prisoners - without the loss of a single American.

As they prepared to assault the town his unit became pinned down by a German Panther tank and in one of the most gallant acts of the war, Megellas single-handedly charged the tank, disabling it and killing the crew with two grenades, eliminating the threat to his men. For this he was nominated for the Congressional Medal of Honor, however he was instead awarded the Silver Star.

Later, as the 82nd Airborne advanced into Germany, Megellas was promoted to command ‘H’ Company with whom he had served with such distinction.

After the war James Megellas served with USAID for 32 years, including two years spent in South Vietnam.