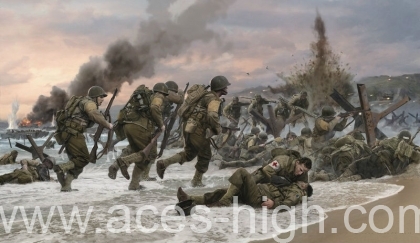 Charging into a blizzard of unyielding machine-gun and mortar fire, elements of the 29th Infantry Division lead the assault on Omaha Beach, 6 June 1944. The scene at the water’s edge is one of chaos and bloody carnage as the heavily laden troops begin the 200 yard rush across the bullet-swept sands of what would later be known as ‘Bloody’ Omaha.

The 29th Infantry Division suffered massive casualties during their assault on Omaha Beach, so to acquire an edition that is personally signed by veterans that fought in the first wave, is truly remarkable.

This outstanding FIVE signature portfolio includes the print Assault on Omaha Beach, individually numbered and signed by the artist and two veterans that fought with the 29th Infantry Division in the first wave on D-Day.

Accompanying each print is a matching numbered limited edition copy of the book Overlord, presented in a superb luxury embossed slipcase and personally signed by a further three veterans who fought on D-Day.

With all the components of the Limited Edition, each book contains three bookplates that between them are personally autographed by a further sixty five veterans who fought on D-Day and the invasion of Normandy, creating an unprecedented SEVENTY signature portfolio.

From Easy Company and 82nd Airborne Paratroopers to Landing Craftsmen, Fighter Pilots and British Infantry - this edition is a living historical account of ‘the greatest military invasion in history’!

Each copy of Assault on Omaha Beach will be issued with one of Simon Smith’s outstanding original pencil remarques, hand drawn in the lower margin of the print.

With all the components of the 70th Anniversary Edition, each set is accompanied by a unique ORIGINAL pencil drawing specially created for this release by artist Simon Smith. Each drawing is personally signed by the legendary member of the ‘Filthy Thirteen’, Jake McNiece and is conservation matted to include the original signatures of a further nine veterans that played an integral part in the D-Day Invasion, creating a historic EIGHTY signature Edition.