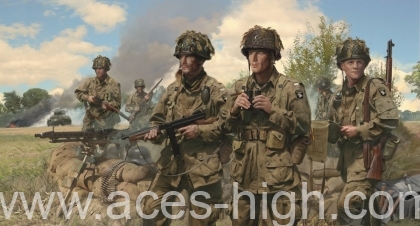 It had been a rough ride in for the men of Easy Company. Their C-47s had run into heavy German flak as they crossed the French coast, their commanding officer had been killed and when they'd finally hit the silk they, like much of the 101st Airborne, had been dropped off target. Men, weapons and supplies were scattered, but in a few hours time elements of the largest amphibious force in history would be hitting Utah Beach. The area behind the beach must be secured.

It had taken till dawn for First Lieutenant Dick Winters to gather individual soldiers together and now his small force of a dozen men had been ordered to take a battery of four German 105mm howitzers that was blocking an exit off the beach. The enemy guns were zeroed in and the landing was in trouble.

In a successful assault, whose tactics have gone into the training manuals, Dick Winters and his tiny force destroyed not only the battery but the deadly machine-gun positions nearby. At last the US tanks could begin to roll off the beach.

Simon Smith's evocative composition portrays the scene shortly afterwards as the men of Easy Company await orders from their new commanding officer. The young lieutenant, whose leadership and tactical skills will, over the next few months, become legendary, carefully considers their next objective - the advance through Normandy towards Carentan.

Every print in the Limited Edition of this powerful new release has been personally signed in pencil by TWO highly respected men associated with Easy Company and the Band of Brothers including actor DAMIAN LEWIS whose outstanding portrayal of Major Dick Winters in the acclaimed series Band of Brothers won him Best Actor at the 2001 Biarritz International Golden FIPA Awards and a Golden Globe nomination.

This SIX signature edition is issued with a unique and highly prized ORIGINAL pencil drawing by Simon Smith, which is personally hand signed by Easy Company's veteran, Earl E. McClung.  Each drawing is conservation matted to include Museum quality reproduction Screaming Eagle patch, jump wings and the original pencil signatures of a further three prominent original members of Easy Company who fought during D-Day and the Normandy campaign: