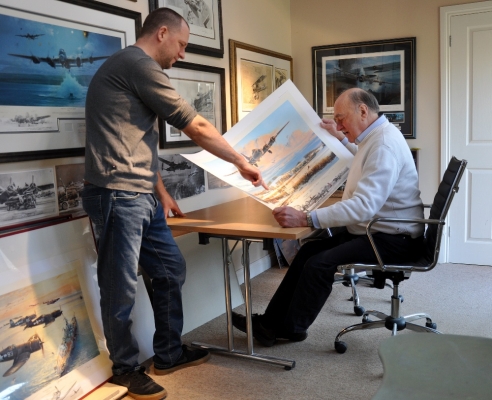 In December 1903 on a small field just south of Kitty Hawk, North Carolina, brothers Orville and Wilbur Wright pooled their knowledge and enthusiasm to become the first men to fly the world’s first successful motor-operated aircraft – the Wright Flyer. This epoch-making moment made the Wright Brothers a household name revered ever since by all those involved in aviation – and the art genre it gave birth to.

Now, just over a century after the Wright brothers first took to the air, the world’s most successful aviation artist Robert Taylor has entered into his own family partnership – an exciting venture with his artist son Richard who, for the past few years, has been carving out quite a name for himself as one of the finest draughtsmen in the aviation art business. Mindful that Richard’s tutor is regarded as one of the finest aviation artists of all time, canny enthusiasts have long been collecting Richard Taylor drawings, works often accompanied by the skilful addition of coloured highlights. With Robert’s worldwide reputation stretching back decades, and Richard’s current international standing, father and son have now teamed up for this exciting collaboration to showcase their heritage with a ground-breaking series entitled the LEGACY REMARQUES.

What exactly are Legacy Remarques?

Such has been the demand for Robert’s work over the years that there remain a limited number of prints allocated for Remarque editions that are still awaiting completion. But, with a packed schedule stretching far into the future, it is unlikely that Robert will ever have time to fully complete the task. Now, however, Robert and the Military Gallery have found a solution: some of these iconic titles, all autographed by Robert and complete with their original signatures, will be re-purposed into LEGACY REMARQUES with the original drawing completed not by Robert but by his talented son Richard. To avoid any confusion, Richard will personally sign each Legacy Remarque that he completes, and the edition will be clearly identified and numbered as a ‘Legacy Remarque’.

The size of each LEGACY REMARQUE edition reflects the number of prints from the original print-run that are still available to be remarqued and edition sizes will therefore always vary, as will the size of the Remarque drawing available.